Orville Redenbacher would be proud . . .

We went to the movies recently. Before you get all geared up for a review from one of the latest movies, let me disappoint you.

We saw Chicken Run.  Yep, the cartoon (sorta) about some chickens on a chicken farm that are forced to lay eggs, but would rather escape to the free world of green grass, little chicks and love.  It was pretty bad.  I think it was claymation before clay or mation got involved.  Did I mention it was bad?  (I especially like the tag line at the top of the picture:  The Year’s Funniest Movie!  Only if it came out January 1st and there were no other movies playing.) 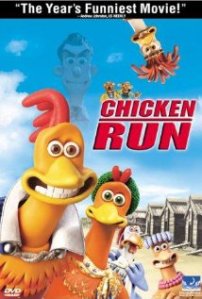 But it was $2 and the Tater LOVED it.  Doesn’t matter that we have the DVD at home and she’s watched it enough to know what was gonna happen next (Thank God, because I couldn’t really pay attention and when you’re not paying attention with a 5-year-old in the movies, they will ask you 172 times “What’s Happening?”.  And if you don’t know, they ask LOUDER the next time.).

It was the summer kid series and for $2, you get a movie (sort of ), a drink and popcorn. Damn good deal!

I was paying for our damn good deal and glanced up at the normal concession prices while I waited for my drink and so-much-butter-you-lips-are-slick popcorn.

And you can’t bring any outside food into the theater because that would cut into their profit and we just wouldn’t want that, would we!  I bet they make A LOT of money on concessions because no matter how expensive the popcorn is, you HAVE to buy it when you’re at the movies ~ it’s a rule.

So we’ll stick to the matinée, the deals, the summer kids movie series and the big ol’ RedBox on the corner…..cause when I pay $7 for a bag of popcorn, it better come with a margarita on the side!

I'm a redneck, barefoot, rum and tequila drinking Southern Belle. I'm still trying to figure out what I want to be when I grow up but know that anything involving Margaritas is a top choice.

Raising a granddaughter, caring for a father who lives in my yard and making sure my husband, Mac, has clean underwear for all his travels keeps me pretty busy, but I still have time to scope out recipes I'll never make on Pinterest, make up new words I can use instead of cussing, and pretend I know proper English.

Thanks for hanging out with me!!
Cheers, Y'all !!!

That’s what she said….